Some women have symptoms, while others may not. Symptoms also vary from woman to woman in intensity.

The most common symptom of endometriosis is pelvic pain. The pain often correlates to the menstrual cycle, however a woman with endometriosis may also experience pain at other times during her monthly cycle. Endometriosis.org

Here are the most common symptoms:

Some women with endometriosis also suffer:

It is very important that you don’t assume you have endometriosis based on the above symptoms. These symptoms have many other causes, so speak to your doctor to discuss diagnosis.

Despite hallmark symptoms, the average delay in diagnosis remains an astounding 9 years, and a patient will seek the counsel of 5 or more physicians before her pain is adequately addressed. – Michelle E. Marvel, ERC

The symptoms of endometriosis can also indicate many other conditions – such as irritable bowel syndrome (IBS) – and because endometriosis manifests itself in a variety of ways, diagnosis can be difficult.

You know your body, so speak to your doctor about all your symptoms. If a doctor ignores your symptoms, don’t give up, seek a second opinion, or a third opinion if necessary. The earlier endometriosis is diagnosed, the earlier you can be treated to relieve your symptoms.

Imagine if everyone tried to make one other person smile each day... 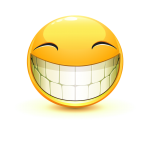